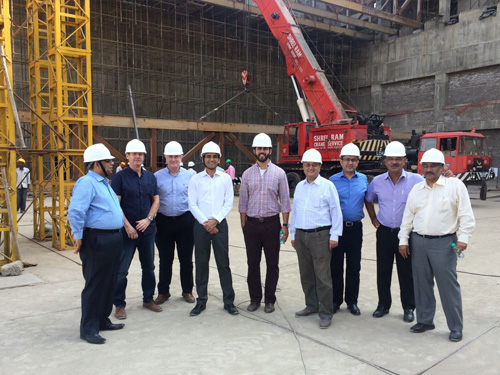 StadiArena have just returned from a trip to India where they visited several potential project sights, as well as reviewing the progress of the world’s first StadiArena in Ahmedabad.

TransStadia (our exclusive Indian licensees) are nearing completion of their visionary project to deliver a true multi-use stadium that will cater for 12 sports, exhibitions, conferences, banquets, members club and sports medicine – delivering their objective to build financially viable, socially acceptable sports infrastructure that is designed based on the fundamental principles of Sports, Community, Economics and Legacy.

The project was awarded under a Public Private Partnership to TransStadia by the then Hon’able Chief Minister of the Government of Gujarat, Shri Narendra Modi (now India’s Prime Minister), further demonstrating India’s determination to become a world-leader in innovative technologies.